LINX has announced the geographical expansion of its Private VLAN service (PVLAN).

Already available on LINX’s LON1 platform in London, PVLAN is now being rolled out on its LON2 network in the capital, plus at its regional exchanges LINX Manchester, and LINX NoVA in the USA.

PVLAN is a simple and straightforward Layer2 point-to-point connection facility. Ports can be configured into PVLANs for peering and other services such as cloud, and also to allow direct connection between member ports on the same LINX LAN. The service is semi-automated, and members can configure their PVLANs from the LINX member portal. 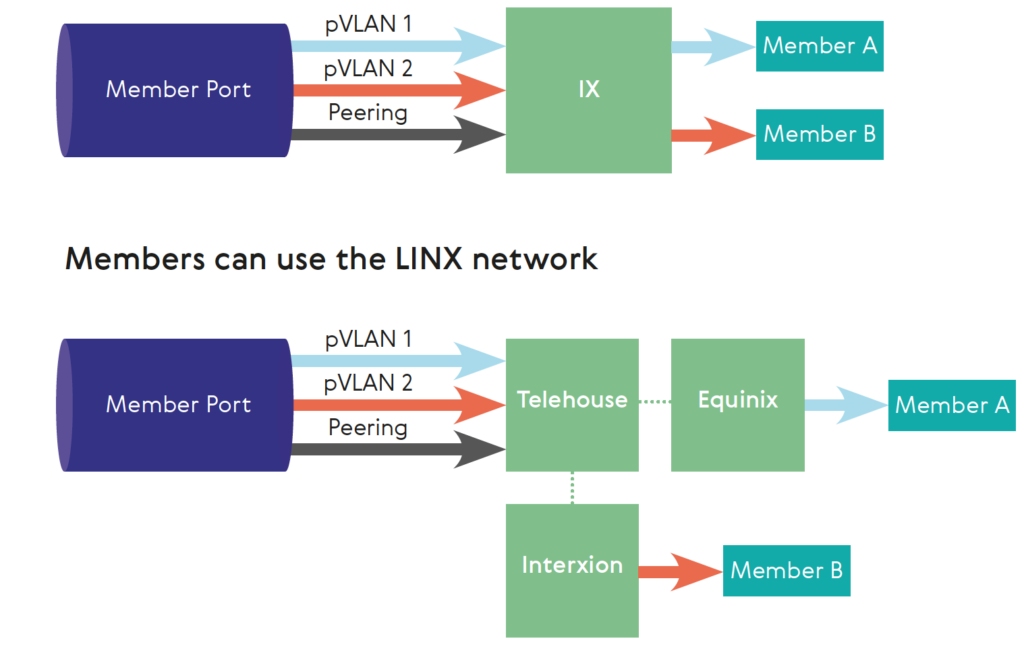 In June LINX launched a new service for their members in the form of Closed User Groups (CUG) and are pleased to announce the first take up of this service by DDoS Scrubbing Center, NaWas.

NaWas / The NBIP offers small, medium and large Internet and VoIP providers an on-demand service to combat DDoS attacks in the Netherlands and the rest of Europe. Before the pandemic they were logging around 3-4 attacks per day. This has risen to an average of 7-12 attacks daily, with peak traffic of 300Gbps becoming the new normal.

NaWas are already serving DDoS protection for a growing number of LINX members via their Closed User Group and are anticipating this number growing quite rapidly, as the issue of DDoS attacks continues to rise.

The LINX Technology team recently implemented BCP214 on some of their UK peering networks.

BCP214 is the practice of ensuring BGP sessions are forcibly torn down prior to service impacting maintenance activities being carried out on the LINX network.  This update has been actioned following a high demand from the 1000 ASN strong LINX community.

BCP214 is implemented by filters being applied to the member interface filtering bidirectional TCP port 179 traffic. By culling BGP sessions, this reduces the amount of traffic disruption to LINX members by making BGP speakers pre-emptively converge onto different paths, so traffic blackholing is minimised.

The first roll out of BCP214 is on the LON2 network in London and also LINX Manchester as these are the networks on the Network Configuration Automation (NCA) enabled OCNOS platforms. LINX’s primary LAN in London, LON1 is expected to go live with BCP214 in the next quarter along with the US interconnection point, LINX NoVA.

Following a request by the LINX membership we are pleased to confirm that AS Path prepending is now available and fully supported on the LINX Route Servers.

Members are now able to manipulate the BGP AS Path attribute through prepending multiple entries of an AS for prefixes they announce on the LINX Route Servers. Therefore, they can action AS Path prepending to deprioritise any prefix they announce to the Route Servers in favour of an alternate path. This can be done by tagging a specified community to their prefix or prefixes. In addition, members can either apply AS Path prepending to all members, or to selective members.

“This past year we have seen a surge in the demand for peering globally. As end users become increasingly hyper-sensitive to overall digital experience and downtime, building a strong relationship with LINX has been a priority for us to deliver a seamless peering solution to our customers.”

LINX and the Bangkok Neutral Internet Exchange (BKNIX) announced recently a new strategic partnership. The arrangement will see LINX sharing key industry insight like this with BKNIX including any technical knowledge, training and strategic guidance in order to plan and grow their IXP.

“Every connection is possible. BKNIX is pleased to partner with LINX to increase opportunities for our global exchange. Moreover, this will help to strengthen the infrastructure and improve Thailand’s Internet connection to match the high standards of the world’s leading countries. Like LINX, BKNIX members can peer, take advantage of optimising routes and reducing latency, improve user experience, enjoy lower overhead and receive added benefits from knowledge and technology sharing.”

Following an hour-long phone call between the two leaders, Biden told reporters, “I made it very clear to him that the United States expects, when a ransomware operation is coming from his soil even though it’s not sponsored by the state, we expect them to act if we give them enough information to act on who that is”.

Biden’s demand follows several recent high-profile ransomware attacks by groups linked to Russia, the most recent against Florida manager service provider Kaseya by prolific cybercrime syndicate REvil. The same group unleashed a major ransomware attack on the meat producer JBS in June, crippling the company and its supply until it paid an $11m ransom.

In our Industry News Briefing we highlight a few of the current news stories relating to the telecoms industry.

If you are a LINX member and would be interested being featured in a future edition of the LINX newsletter please email us at newsletter@linx.net.

The event will welcome peering managers and coordinators from networks connected to the host Internet exchanges. Besides some interesting topical agenda, the three-day event accommodates room for attendees to virtually meet on a one-to-one basis to discuss bilateral peering business opportunities.

The programme committee will be looking for presentations and related to peering and technical topics of interconnection. Your presentation should address:

Presentations must be of a non-commercial nature with product or marketing heavy talks strongly discouraged. Submissions of presentations should be made to the programme committee and should include the following information:

Please send in your presentation asap. We decide on a first come first serve basis. More information about the event and other activities around the virtual EPF 2021 may be found on the EPF Facebook Group or the event page below.

Spotlight on LINX NoVA: The Benefits of Regional Interconnection

If you have missed any of LINX’s live events or training sessions we make them available to watch again in our Learn with LINX section and LINX YouTube Channel. 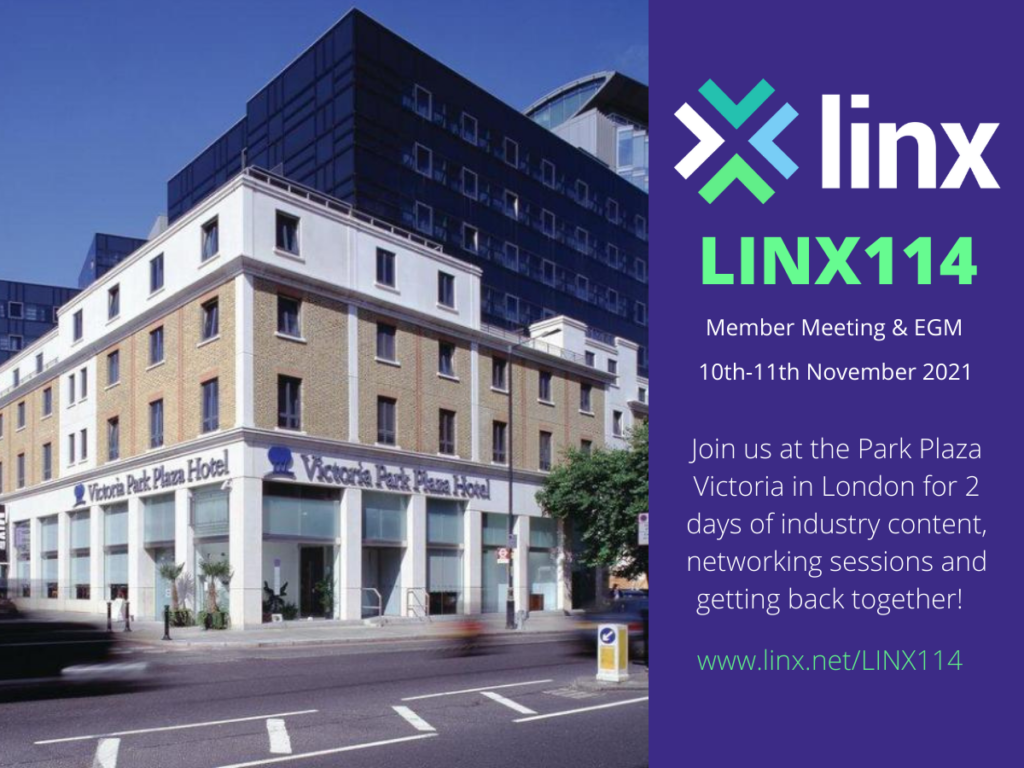 The LINX114 member conference and EGM will take place at the Park Plaza Victoria, in London on Wednesday 10th – Thursday 11th November 2021. It will be our first in-person member meeting since February 2020 – we hope to see you there! Registration details will be announced in due course.

What You May Have Missed

This special episode of LINXcast marks the 20th anniversary of the European Internet Exchange Association (Euro-IX).

Among the topics covered were the catalysts in establishing Euro-IX, the long-term goals, its greatest achievements, and what would’ve happened if Euro-IX hadn’t been established at all. Would the IXP industry have been more competitive and less collaborative?

To listen to previous shows in the series please visit the LINXcast page on the LINX website.